Refinancing From a Financial Perspective

Homeowners, divorcing or not, typically don’t understand the science of refinancing their current mortgage from a financial perspective. When divorcing clients are required to refinance the marital home they still need to think financially rather than from an emotional perspective.

There are two primary questions when considering a straight rate/term refinance as in an equity buy-out:

1. Is the lower interest rate really worth my while? Many people believe there is a certain ‘point spread’ before it is actually beneficial. Not necessarily the right answer.
2. Is there an actual benefit of going back into a full 30 year or 15-year term when I’m already ‘X#’ of years into my current mortgage?

The savings is an arbitrary number which varies in significance with each client. We typically look at the amount of savings and determine the actual time frame in which it takes to recoup the costs of the new mortgage. For example, if it will take 24 months of the new lower payment for the net cash savings to pay off the cost of the new mortgage and the homeowner plans to remain in the home for another 10 years, it is worth the refinance? Also, homeowners refinance for different reasons – mainly cash flow. If the monthly out of pocket cash flow is a positive for the homeowner, then it may very well be worthwhile. Again – it is arbitrary and depends on the individual needs.

The bigger issue often becomes when a homeowner knows that they could refinance to a significantly lower interest rate; however, they are reluctant to extend the term of their original 30 year (or 15 year) term loan because of the amount of time they already have invested.

Breaking it all down….

Let’s assume a homeowner is considering refinancing his current mortgage which he already has 4 years invested. We are going to compare refinancing to a new 30 year fixed mortgage at a lower rate as well as a new 26-year mortgage thus allowing him to take advantage of current lower interest rates while not adding additional years to his mortgage.

The following chart shows a side by side comparison of the existing loan, a new 30 year fixed and a 26 year fixed. (Assuming closing costs are paid at closing and not rolled into the new loan.) From a cash flow perspective, the new 30 year fixed loan looks to be in the client’s best interest. 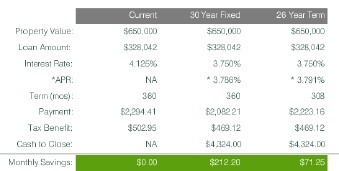 Unfortunately, most homeowners don’t have the opportunity to fully compare refinancing options from a total cost perspective. The following chart shows the Total Cost Analysis (60 months) of the current loan with the new 30 and 26 year term loans.

From a cash flow basis, we know that the new 30 year fixed option has a monthly savings of $212.20; however, from a Total Cost Analysis perspective, you can see the overall effect of a new 30 year fixed has a total negative net savings of $289 due to the lost tax benefits and extended term back to the original 30 years.

From a Total Cost Analysis standpoint over 15 years, the new 26 year term loan has an overall positive effect and justification for refinancing. $1,965 more paid towards principal and $5,956 less paid in interest. Every homeowner has their own unique situation which should be analyzed over a Total Cost Analysis to accurately determine the benefit if any from refinancing their current mortgage.

Always work with a Certified Divorce Lending Professional (CDLP) when real estate or mortgage
financing is present in divorce.

This is for informational purposes only and not for the purpose of providing legal or tax advice. You should contact an attorney or tax professional to obtain legal and tax advice. Interest rates and fees are estimates provided for informational purposes only, and are subject to market changes. This is not a commitment to lend. Rates change daily – call for current quotations. The information contained in this newsletter has been prepared by, or purchased from, an independent third party and is distributed for consumer education purposes. Copyright 2019 | Divorce Lending Association

Brandon McNamee
15:06 07 Feb 19
A colleague recommended Tammi Lindley and her team to my boyfriend and me when we were looking to purchase our first home together. As so often happens, we started our search and quickly found a home we wanted to bid on, and Tammi and her team were right there with us, guiding us on the information to collect and ensuring we had our preapproval right when we needed to put in our offer.Tammi also kept pace with us as that offer fell through, as my job changed (and so, too, did the basis of our preapproval), all the way through to finding the home we purchased, on which we submitted an offer the very same day we viewed it. Tammi worked hand in glove with our realtor to ensure we met all offer deadlines, and together they ensured we closed in less than a month - 3 weeks exactly from the date of our offer.Tammi and team were professional, enthusiastic, relatable, and responsive. We were completely satisfied with their services and I would strongly recommend Tammi Lindley to any buyer at any level of experience and resources.
See all reviewsWrite a review