Should a divorcing client move into their investment property after divorce? 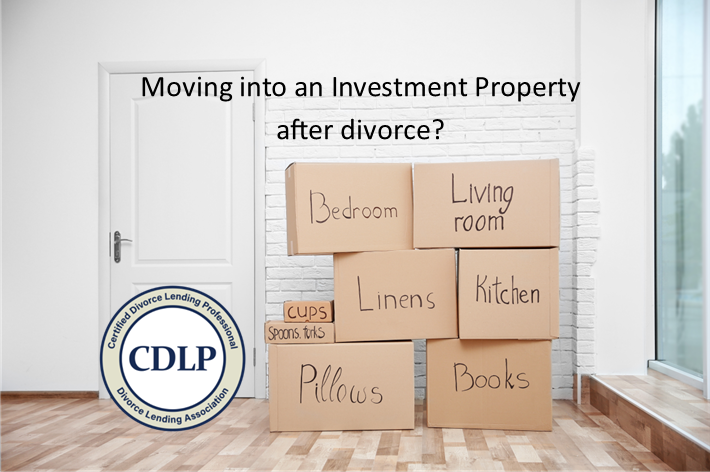 BEWARE OF ANY POTENTIAL TAX CONSEQUENCES WHEN MOVING INTO AN INVESTMENT PROPERTY AS YOUR PRIMARY RESIDENCE.

When going through a divorce, one of the first decisions that need to be addressed is where will you live. Many divorcing clients not only own the marital home but they also own investment properties as well. The decision to move into an existing investment property may seem like a simple answer; however, there may be future tax consequences when making this move.

One of the highlighted tax law changes is related to prorated capital gains exclusion for real estate for periods of non-primary use.  This may be a concern for divorcing clients when one spouse retains a current investment property to be used as their new primary residence.

Under the Housing Assistance Tax Act of 2008, the IRS now wants its share of the capital gains tax during the period from January 1, 2009, up until the property becomes a primary residence.

To calculate the amount of gain that is allocated to periods of nonqualified use, the total amount of gain is multiplied by the following fraction: the aggregate periods of nonqualified use while the property was owned by the taxpayer divided by the period the taxpayer owned the property. Nonqualified use, however, does not include any portion of the five-year period that occurs after the last date the property is used as the principal residence of the taxpayer. For example, suppose John buys a home on January 1, 2014, for $400,000 and uses it as a rental property for two years, claiming $20,000 of depreciation. On January 1, 2016, John begins using the property as his principal residence. John moves out of the house and sells it for $700,000 on January 1, 2019. John used the property for a non-qualifying use for the first two years he owned it. The year after John moved out, however, is treated as a qualifying use. Therefore, 40% (two out of five years owned), or $120,000, of John’s $300,000 gain is not eligible for the exclusion. The balance of the gain, $180,000, may be excluded. In addition, John must include $20,000 of the gain attributable to depreciation as ordinary income (unrecaptured Code § 1250 gain).

Nonqualified use also does not include any period during which the taxpayer or the taxpayer’s spouse is serving on qualified official extended duty (not to exceed an aggregate period of 10 years), nor does it include any other period of temporary absence because of change of employment, health conditions, or other unforeseen circumstances as may be specified by the IRS (not to exceed an aggregate period of two years).

The Housing Act is intended to restrict gain exclusion when the property is transferred from a nonqualifying use to a principal residence, so the new provisions do not restrict gain exclusion when a property is transferred from a principal residence to a non-qualifying use. Again, this provision only applies to nonqualified uses as of January 1, 2009.

The role of a CDLP is to help not only you as the divorcing client but also the attorney and financial planner understand the opportunities available, as well as the challenges divorce, can bring to mortgage financing during and after the divorce. When the CDLP is involved during the divorce process and not after the fact, many potential financing struggles can be avoided with valuable and educated input from the Certified Divorce Lending Professional.

Are you or someone you know going through a divorce where real estate or mortgage is involved? We are the highest rated Certified Divorce Lending Professionals in the Pacific Northwest. Contact us today for a no-obligation consultation: 503.517.8641 or teamlindley@mtgxps.com.

Brandon McNamee
15:06 07 Feb 19
A colleague recommended Tammi Lindley and her team to my boyfriend and me when we were looking to purchase our first home together. As so often happens, we started our search and quickly found a home we wanted to bid on, and Tammi and her team were right there with us, guiding us on the information to collect and ensuring we had our preapproval right when we needed to put in our offer.Tammi also kept pace with us as that offer fell through, as my job changed (and so, too, did the basis of our preapproval), all the way through to finding the home we purchased, on which we submitted an offer the very same day we viewed it. Tammi worked hand in glove with our realtor to ensure we met all offer deadlines, and together they ensured we closed in less than a month - 3 weeks exactly from the date of our offer.Tammi and team were professional, enthusiastic, relatable, and responsive. We were completely satisfied with their services and I would strongly recommend Tammi Lindley to any buyer at any level of experience and resources.

Molly K
22:08 22 Jan 19
We just closed on a home January 16th. Tammi and her team were amazing! Prompt, knowledgeable, caring, confident, helpful, kind, and great at explain things, are just a few ways I would describe their service. I always felt safe in their hands and would hands down recommend them to anyone looking to finance a home!

Leon Fitzpatrick
21:00 17 Jan 19
This is the Best Broker I have ever used... They are so helpful & supportive! I tell you there was no way I could have gotten this loan with Tammie, Jennifer and the amazing team! Thanks to them I now have a HOME!

Trevor Graeber
17:01 08 Jan 19
I can’t say enough amazing things about Tammi and her team. She has spent so much time with me going over every aspect of the loan process answering many questions I had and brought up many things I didn’t know about as this is my first home purchase. Tammi’s communication is amazing, when she says she will get back to you, she absolutely will. Highly recommend Tammi and her team to take care of you and treat you like family. You won’t be disappointed in using her team to purchase your dream home or refinance. Thank you to Tammi and her team

Haiying Yu
00:50 24 Oct 18
We choose the Tammi Lindley Team, and we have a good experience with them. Tammi and her team work in a conscientious and responsible, and be attention to detail, we just payed less worried about our loan. It's fast to finish the mortgage process. I will recommend Tammi Team to my friends
See all reviewsWrite a review